Home » Crabbing » How to Get a Job on a Crab Boat as a Greenhorn in Alaska?

How to Get a Job on a Crab Boat as a Greenhorn in Alaska?

Getting a job on a crab boat in Alaska is no easy task, but it can be done. In this article, we will talk about how to get a job as the greenhorn on an Alaskan crab boat and what you need to do before applying for the position. We’ll also talk about salary, work requirements, skills needed, and more.

We hope that this article helps you understand everything there is to know about working on a crab boat in Alaska!

What salaries do greenhorns make?

The amount you will earn on a crabbing vessel will depend on the agreement you make with your captain as a greenhorn. Rookies can often make $30k in their first season, a period which typically only lasts about 3 months.

Greenhorns also have the opportunity to make considerably more than this given appropriate experience.

Captains will often give greenhorn’s a percentage of their take, which can amount up significantly depending on how much they catch in one season.

What qualifications do I need to have to become a greenhorn?

The requirements for working on a crab boat in Alaska vary depending upon the company.

Some companies require greenhorns to have their own gear while other will provide it, which means that you’ll need storage space as well if they don’t supply your equipment with living quarters and food prep facilities onboard (which is usually costly).

What does a greenhorn do exactly?

A greenhorn is essentially an apprentice on a crabbing vessel. They help with preparing bait, hauling in pots, crawling into pots to bait them, and a range of other grunt work as required by the captain.

Depending on the boat, duties may include: Serving as a deckhand or mate (depending upon qualifications) in any of various positions including sternman during set operation periods when dropping pots [nets] into tidal currents running through openings; and/or operating nets from the position at aft end using a tiller to maneuver net for hauling.

Use hand signals with crew members while catching crabs such that they can gauge haul size by number caught per minute estimated before setting pot again after determining catch level has been reached – then dump back overboard those not selected so far without damaging them unnecessarily).

Duties also entail communicating information about catches via the use of a VHF radio system where the assigned channel is provided according be vessel’s captain who coordinates drop operations among other things.

Can only men be greenhorns?

No, any gender can become a greenhorn, with that being said it is far more common for men to work as greenhorns.

Why not start your own crab fishing business?

You may be thinking, “why would I want to start my own crab fishing business?”

The bottom line is that you can make a lot of money. Crabs are one of the most valuable seafood items on the market and people will pay top dollar for them.

It’s difficult for fishermen to get a decent catch because they’re so small and sneaky, but it takes very little effort to set up your own crab fishing business. As a Captain, you can often earn upwards of $200,000 or even more per crabbing season.

With that being said there are a lot of things to owning a business that many fishermen aren’t cut out for including handling the operations side of a business, licensing, regulations, payroll and more.

Some fishermen enjoy the simplicity of being able to work on the sea without the additional requirements that come with owning a business, especially one dependent on the sea.

Best locations to find a job as a greenhorn?

The best location to find a job as a greenhorn crab fisherman is in Alaska. It’s not easy but the money can be good and you will get plenty of experience that won’t go unnoticed by other Captains or fishermen on your first day at sea, they might even offer some tips for how set up traps better!

Jobs are also available outside Alaskan waters with many fishing companies hiring workers all over North America including Canada where jobs can be found on both the east and west coasts of the country in British Columbia, Quebec and Newfoundland.

There are also boats out of California in the Pacific Ocean that sail for days or weeks at a time to fish off-shore near Alaska’s shores where they will stay until their nets overflowing with crab!


References
How to become a crab fisherman on the Bering Sea 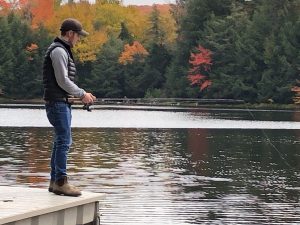